The final round of safety inspections of the Delhi Metro’s 5.17 km ITO – Kashmere Gate section of the Violet Line are scheduled to be held over 2 days on May 22 and 23 by the Commissioner of Metro Rail Safety (CMRS) from the Indian Railways’ Northern Circle.

Trial runs on this section, popularly known as the Heritage Line, were launched from the ITO Station in August 2016 and an independent safety assessor (ISA) conducted an inspection of the signalling system in late-March 2017. The Delhi Metro Rail Corporation submitted its application to the CMRS in April after conducting exhaustive testing through the line’s tunnels, and had since been waiting for the CMRS’ team to scrutinize the paperwork and accept the invite.

Before finalizing these dates, the inspection was tentatively scheduled to take place on May 16 & 17, but was pushed back to May 22 & 23. Back in 2015, the Yellow Line’s 4.49 km extension to Samaypur Badli got delayed due to the CMRS cancelling its inspection twice, so hopefully a repeat of that will not be seen here.

In the upcoming inspection, the CMRS will visually inspect the line’s tunnels, tracks and all facets of the stations such as its PA system, signage, safety features, drinking water facilities, station access and control room. Images from recent CMRS inspections from other parts of the country can be viewed here (Kochi) and here (Chennai).

This section will add 3 new stations to the network at Delhi Gate, Jama Masjid & Lal Qila as well as a new station box at Kashmere Gate to form a 3-line interchange, India’s first, with the Yellow and Red lines:

Images of the new stations’ interiors & exteriors can be viewed on my Twitter handle and in this post showcasing the status of the much delayed Kashmere Gate Station. 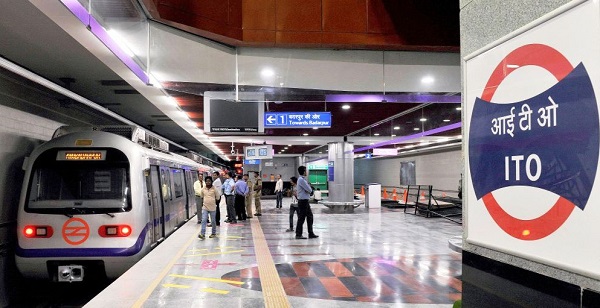 This will be the 4th stretch of the Violet Line to be inspected on the Delhi Metro’s 160 km Phase 3 project after the following sections:

Once approved & inaugurated, the Violet Line, connecting Kashmere Gate with Escorts Mujesar in Faridabad, will become 43.4 km long and the Delhi Metro’s network will expand to 218 km.