On this past Sunday afternoon, tunnel boring machine (TBM) S640 operated by Afcons Infrastructure broke through the northern diaphragm wall of Mahakaran Station on Kolkata Metro’s 16.34 km Line-2, roughly five months after it crossed beneath the Hooghly River and entered into Kolkata’s city limits.

Soil excavation work hasn’t yet commenced at the station, so the Herrenknecht manufactured machine nicknamed Prerna isn’t visible yet to workers. Afcons plans to continue building temporary rings within the station box towards Esplanade, break through the southern diaphragm wall when that gets ready, and later dismantle the tunnel rings built within the station box during excavation. Similar ‘hidden’ TBM breakthroughs, not visible to workers, were recently performed by Afcons at Chennai’s Sir Theagaraya College Station (By S711 and 219-364) as well as locally by TBM S639 at Howrah Station. 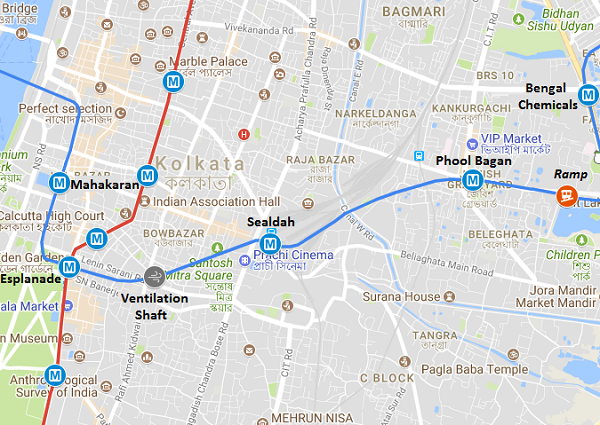 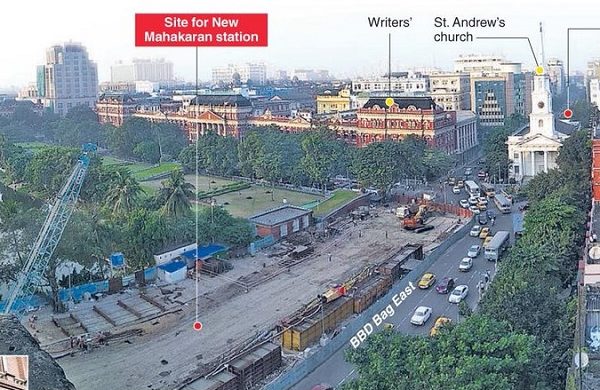 The roughly 2 km journey from Howrah Station to Mahakaran wasn’t an easy one, as the influence zone of the TBM consisted of structurally weak buildings on Brabourne Road (which required temporary evacuation of residents to hotels) and a cluster of heritage monuments like the Writers’ Building, Magen David Synagogue, Beth-El Synagogue, St. Andrew’s Church and Currency Building which required special 24/7 monitoring of soil settlement and grouting injections to strengthen their weak foundations.

With this development, TBM S640 has now come to a temporary halt 19m deep inside the Mahakaran Station’s box. Once the station’s southern diaphragm is ready (located at the bottom-left corner in the image above), it’ll recommence excavation and break through it on the way to Esplanade Station – its final destination. TBM S639 “Rachna” is not too far behind, and is expected to break through the northern diaphragm wall on this Sunday.