On February 6, the Lucknow Metro Rail Corporation initiated the bidding process for constructing Kanpur Metro’s 32.3 km Phase 1 project. In the first notice, they’ve invited bids for the construction of a roughly 8.3 km stretch between IIT Kanpur and Motijheel stations on the 23.785 km Line-1 which will eventually connect IIT Kanpur with Naubasta.

The project’s foundation stone was unveiled in October 2016 and the UP government’s cabinet approved the project’s execution at a cost of Rs 18,342 crore in January 2018. LMRC was appointed as the interim consultant to execute Kanpur Metro’s preliminary construction work, and issue/award tenders while the central government’s approval is awaited for the rest of the project.

Like Lucknow’s first stretch, this first stretch has also been nicknamed as the ‘priority section’. Bids for the Polytechnic Depot’s boundary wall and land development were invited in 2016 under package KNPCC-01 and Systra was appointed as the line’s detailed design consultant (DDC) in September 2016. 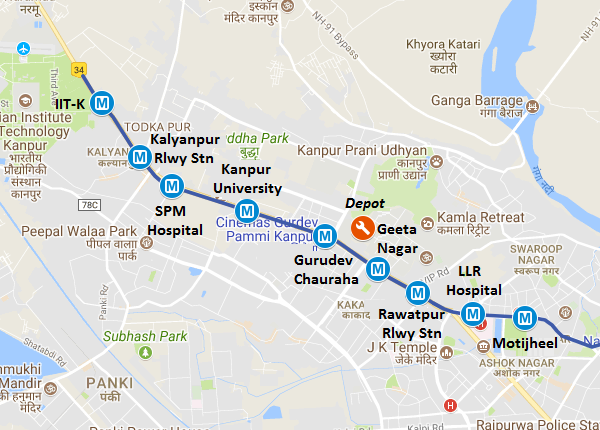 Tender documents went on sale on February 6 and the last date for submitting bidding documents is 3 pm on March 30 after which the bids will be opened & evaluated for eligibility at 3:30 pm. LMRC has estimated this package to cost Rs 734.00 crore and would like civil work to be completed in 24 months.