March 7, 2019 Update –  61.679 km of Phase 4’s routes across 3 lines (priority corridors) with 45 stations have been approved by India’s Central Government for construction.

February 9 2016 Update– A new modified plan of Phase 4 has been released. Check out the following link to view it: DMRC MD Approves Survey for Modified 95.86 km Phase 4.

Thanks to my follower Pritish Singla for giving me a heads-up that the Delhi Metro Rail Corporation has released a map of the proposed 103.93 km Phase 4 in their 2014-15 annual report! While initial details of Phase 4 have been made public in the past and various media houses have published their own construed version of it, this map is the first map to be published by the DMRC and can be taken as a good benchmark or idea for what’s in-store for Delhi until the final Detailed Project Report is ready.

The image quality uploaded by the DMRC is evidently not the best, so I’ve recreated the map with the actual alignment towards the bottom of this post.

Here’s the map the DMRC published. A higher resolution of it can be viewed here. 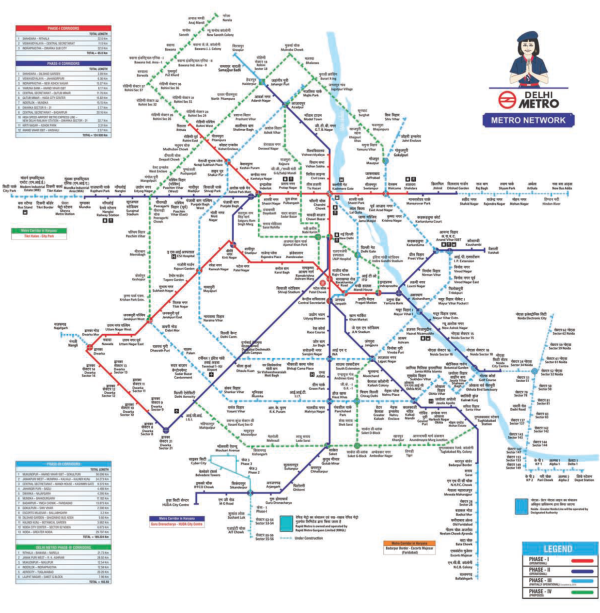 In Phase 4 of the Delhi Metro project,  the following lines & extensions will be built:

As per a report from last year, the Lajpat Nagar – Saket line will be a spur of the Tughlakabad – Aerocity line, similar to how the Yamuna Bank – Vaishali line is a spur of the Dwarka – Noida line. In the next 3 years, I expect additional extensions of existing lines to be proposed which will take Phase 4 beyond the proposed 103.93 kms route length.

Once Phase 4 is complete, in 2 maps – here’s how the Delhi Metro’s network with the proposed 103.93 km Phase 4 will look like. Both maps have been embedded into the post to allow you to zoom in/out and explore for yourself!

After the funding pattern & mechanism for constructing phase 4 is decided and a bulk of Phase 3’s construction nears completion in 2017, the tendering process for Phase 4 will begin! I expect actual construction on the ground to start in 2018. 🙂

February 9 2016 Update – A new modified plan of Phase 4 has been released. Check out the following link to view it: DMRC MD Approves Survey for Modified 95.86 km Phase 4.