The Bangalore Metro Rail Corporation Ltd (BMRCL) recently released their January 2016 newsletter which can be accessed here! Before proceeding, I just wanted to thank everyone who tweeted and emailed me about the release. Like always, let’s first start with some new images and then dive into analyzing the data contained within it.

Chickpet station from where TBMs Kaveri & Krishna have been launched – Photo Copyright: BMRCL

The tunneling data in the newsletter was recorded at the start of the month and as such does not reflect recent progress made in the last 11 days. However, since data from the December newsletter is available, a valid comparison can be made to see the progress made over the past month (December) with the month before (November).

Purple line –  Tunneling on the Purple line’s 4.8 km underground section between Magadi Road and Cubbon Park was completed in March 2014 and trials have been underway since November. After many announcements stating it’ll be operational in January, the BMRCL has now pushed the opening to February-end, but as per my evaluation, they won’t be able to do so since they are yet to even file an application to the Commissioner of Metro Railway Safety (CMRS) to inspect the line for safety purposes. 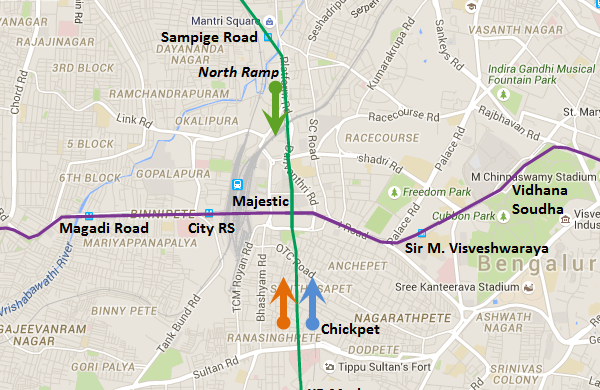 • Orange Arrow – The Krishna TBM made a breakthrough at Chickpet station on August 31 from the KR (City) Market station after a slow and tiring journey of 22 months. After being put through repairs for 112 days, the TBM was launched on December 22 towards Majestic for one final drive. The BMRCL strangely did not include its progress in the newsletter, but as per an on-site engineer, 4 rings have been placed which is roughly equivalent to 6m of tunneling.
Distance Left – 741 meters

• Blue Arrow – The Kaveri TBM was launched from the Chickpet station in February 2015 and has covered only 25.5m since the December 2015 update. The reason for this includes hard rock and the precarious nature of buildings en-route to Majestic that had to be evacuated.  At this poor rate of tunneling, the TBM will reach Majestic only by August 2016.
Distance left – 180 meters

• Green Arrow – The Godavari TBM had a new cutterhead installed on it in late July 2015 and restarted tunneling towards Majestic in mid September. Since the December 2015 update, it has progressed by 88.5m and has continued its excellent run from November in which it tunneled 75m. At this rate of tunneling, the TBM will reach Majestic around the month of June 2016.
Distance left – 424.50 meters

Like the month of November, in December – apart from TBM Godavari making solid progress, the rest 2 TBMs (Kaveri & Krishna) have made very little progress. If TBM Krishna is to take the same amount of time as TBM Kaveri to tunnel the parallel tunnel, then in all likelihood, tunneling on Phase 1’s underground section will only be completed by early to mid 2017. After taking into account the time it takes to lay the track bed, install electrical/signalling equipment, perform tests and have the line inspected, the entire 1st Phase of Bangalore’s Metro is most likely to be completely operational only by the end of 2017.