AECOM, a technical services firm recently won the Detailed Design Consultant contract for Mumbai’s 40 km Dahisar – Mankhurd line! Besides reviewing the design of the viaducts & stations, their role also includes and is not limited to producing and proposing alternate designs for all architectural, building services, electrical and mechanical works. Interestingly, this is the 2nd time a DDC has been appointed for this line. During the PPP days of 2005-2015 which I refer to as Mumbai Metro’s lost decade, the Reliance led consortium appointed SYSTRA as the DDC in 2010.

Screenshot of an AECOM Technical Director’s update on LinkedIn 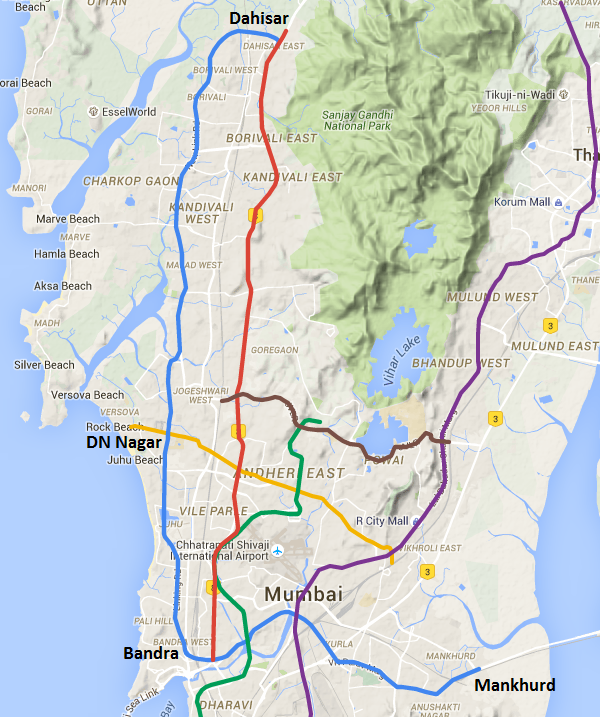 This entirely elevated line is referred to as Line 2 or Metro 2, and currently only the 18.6 km Dahisar – DN Nagar section of it has been taken up for construction with a deadline of March 2019 set by the Maharashtra government. In January 2016, the DMRC invited bids for constructing 2 packages and recently opened the technical bids to reveal the following list of bidders:

Technical evaluations will be carried out over the next couple of weeks after which the financial bids to assign a contractor will be opened in mid-May. During the monsoons, the contractor is expected to carry out preparatory works for mapping en-route utilities and obtaining clearances for diverting traffic. Full fledged construction along the route (New Link Road) will only begin once the rains subside in August/September.

The timeframe of this line is somewhat similar to the 16.5 km Andheri East – Dahisar East line for which the MMRDA last week approved the appointments of Simplex Infrastructure, J Kumar Infraprojects and NCC to build it. The foundation stone for both these lines were laid together by PM Modi in October 2015.