If you’ve been following along, then this shouldn’t come as a surprise.

Speaking with The Hindu’s editorial team in Delhi, the Delhi Metro Rail Corporation’s Managing Director Mangu Singh has indicated they’ll be able to open the 5.17 km ITO – Kashmere Gate extension of the Violet Line, also known as the Heritage Line, only after the festival of Holi on March 13.

Excerpt from The Hindu:

“We are not in a hurry to open half done stations,” Mr. Singh said, referring to Phase II when many stations were opened to the public even before all the work was completed. Speaking about the much-delayed and much-awaited ‘Heritage Corridor’, which will link ITO and Kashmere Gate metro stations, Mr. Singh said the line was unlikely to open before Holi on March 13. “It is almost ready but needs fire clearance and clearance from the Commissioner for Metro Rail Safety. It is a sensitive issue as other agencies are involved, it is not in our hands,” he said.

For one, I’m glad he’s straight-up admitted that the stations are not ready, as the Kashmere Gate Station has quite some interior finishing work pending before it becomes presentable and safe for public use – see lots of images here.

Recent images from inside the Jama Masjid Station can be seen here. Here’s a new image of the Delhi Gate Station’s platform which I recently shared on Twitter: 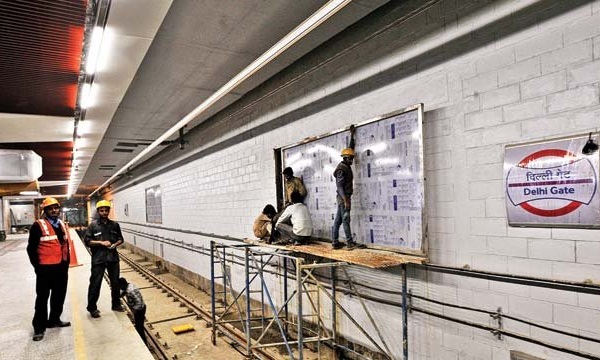 And here are some images of the entry/exit structures shared by a Twitter follower:

As I’ve previously highlighted in the January 2017 update post, with the way things are going at Kashmere Gate and the NATM tunnels north of it, where trains still haven’t entered for testing, this line is heading towards a Q2-Q3 commercial opening.