The BMRCL invited bids for this most-awaited package of the city, officially referred to as Reach 1B, of the 72 km Phase 2 project in December 2016 with an estimated cost of Rs 666.12 crores, and the ITD-ITD Cem JV put in the lowest bid at Rs. 683.79 crores.

Here are the financial bid values submitted by the lowest 3 technically qualified firms:

This elevated extension in east Bangalore will be entirely elevated and consist of 7 new stations at Kundalahalli, Vydehi Hospital, Sri Satya Sai Hospital, ITPL, Kadugodi, Ujwala Vidyalaya and Whitefield. The contractor will also be responsible for constructing a small viaduct connecting the main-line to the proposed Whitefield Depot which will be located at the north-west corner of Hope Farm Junction. 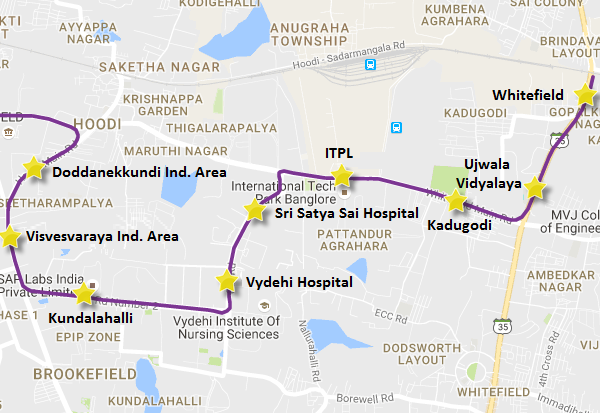 The line’s exact alignment and location of stations can be viewed in this PDF released by the BMRCL in mid December 2016.

Tree cutting & demolition of the acquired properties is well underway and with this development, ground-work for the construction of this section is now expected to begin in June 2017. As mentioned previously, I expect this section to open for commercial operations no sooner than 2022.

If no issues arise, then in the coming days the BMRCL, with KfW’s approval, will go on to award ITD-ITD Cem with the 72 km Phase 2 project’s 5th major civil contract: 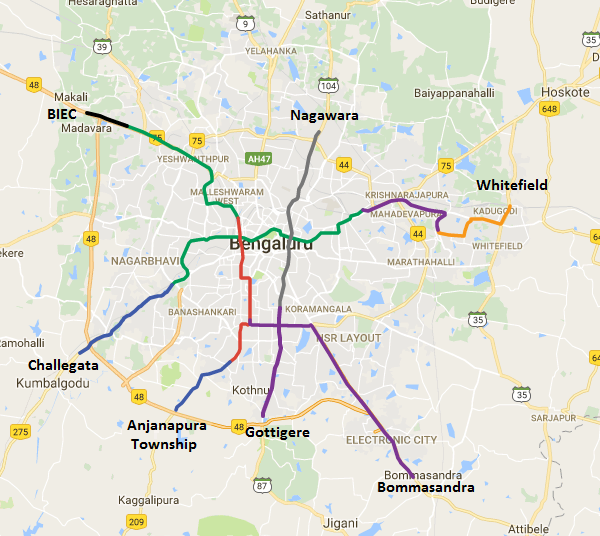 Out of all contracts awarded so far in Phase 2, the bidding stage for this section has been the fastest to be concluded with the BMRCL taking only 1 month to open all tender documents, evaluate the eligibility of all bidders, evaluate their technical bids and open financial bids to determine this section’s contractor. Hopefully this is a sign of things to come for the rest of the elevated sections which include Reach 1A (Baiyappanahalli – Visvesvaraya Ind. Area), Reach 5 (RV Road – Bommasandra) and Reach 6 (Gottigere-Swagath Road).