After finally initiating the bidding process for the middle and southern sections of the new 18.80 km RV Road – Bommasandra elevated line earlier this month, the Bangalore Metro Rail Corporation Ltd. today invited bids from civil construction companies for constructing the northern (and last pending) section of the line. This 6.340 km elevated section from HSR Layout to RV Road station will run primarily on Marenahalli Road and has interestingly also been named as ‘Reach 5’.

In addition to a regular viaduct on either ends, this section also includes the construction of a double decker viaduct for vehicles and metro (estimated to be 2.5 km long) and 5 new stations. Among them, the new RV Road station will connect up to the Green Line’s RV Road Station and a massive 5 level Jayadeva Hospital Interchange Station will be constructed (after demolishing the existing flyover over Bannerghatta Road) to allow users to connect to the Phase 2 project’s other 21.25 km new line between Nagawara & Gottigere. In the future, the Central Silk Board Station will also be connected to the proposed 17 km Central Silk Board – KR Puram Line which is currently awaiting an approval from the Karnataka state government’s cabinet. Another interesting feature to note is that the viaduct will cross over the Green Line’s viaduct and piers for it will be extremely high – see details/map here. 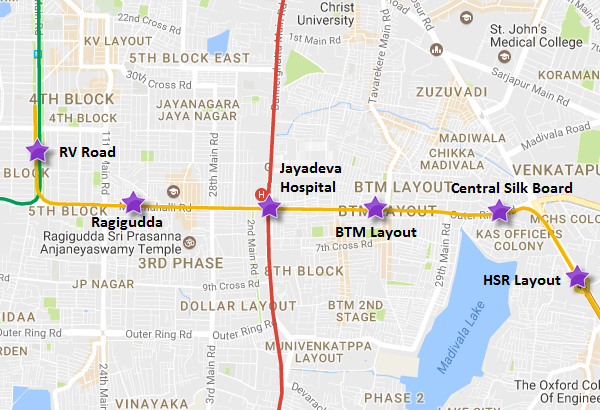 Tender documents will go on sale on January 12, 2017 and the BMRCL has estimated this section to cost Rs. 820.00 crores. The last date for submitting bidding documents is 3 pm on March 20, 2017 after which the bids will be opened & evaluated for eligibility at 3:30 pm.

In an earlier post, I’ve explained the time consuming hoops that each bidder must jump through in the bidding process and also provided what BMRCL’s track record in Phase-2 looks like. Like the other packages, I expect the contract for the HSR Layout – RV Road section to be awarded no sooner than Q3 2017 with ground work beginning shortly after in Q4 2017 subject to approvals. As far as the line’s opening goes, I expect this section (and thus effectively the entire line) to open only by 2023 due to site constraints on Marenahalli Road and the overall scope which involves special spans (over the Green Line at JP Nagara Signal and Central Silk Board), the double decker viaduct and the Jayadeva Hospital Interchange.

With this notice out, the BMRCL in the 72 km Phase 2 project now only needs to invite civil construction bids for the 21.25 km new line between Nagawara & Gottigere. That line is expected to have 5 packages – 2 elevated and 3 underground. After that is done, they’ll move on to the depots and technical packages (eg. Rolling Stock, Signalling, Automatic Fare Collection System etc.).