Here’s something that I found mildly interesting.

The Bangalore Metro Rail Corporation Ltd. recently made a small realignment to their upcoming 18.80 km Rashtriya Vidyalaya Road – Bommasandra metro line of Phase 2 at its northern terminal in Jayanagar after running into opposition from local residents of the Lakshman Rao Park area. Residents were concerned that construction would involve (1) large scale acquisition as the line turned east towards Marenahalli road (2) cutting down 150 full-grown tress and (3) disrupting their water supply as the Cauvery I, II and III water pipelines are located beneath the Lakshman Rao Park.

As per a BMRCL official who interviewed with the Bangalore Mirror:

On the Jayanagar 8th Block side, the damage would be too much since more than 150 well-grown trees would come under the axe. Of course, even some properties had to be acquired. But since there was a Plan B that works better with a slight change of alignment, we froze this line. Yes, it is close to water lines, so we discussed carrying out the construction without endangering the utility lines with the BWSSB. The BWSSB chief has given the green signal. The issue is not just water lines but also private properties that will be demolished,

The Plan B mentioned above involves beginning the RV Road – Bommasandra line’s viaduct (shown in Yellow below) from the western side of the RV Road station and crossing over the existing Green line’s viaduct between RV Road & Banashkari stations on its way to the Ragigudda Temple station on Marenahalli road. 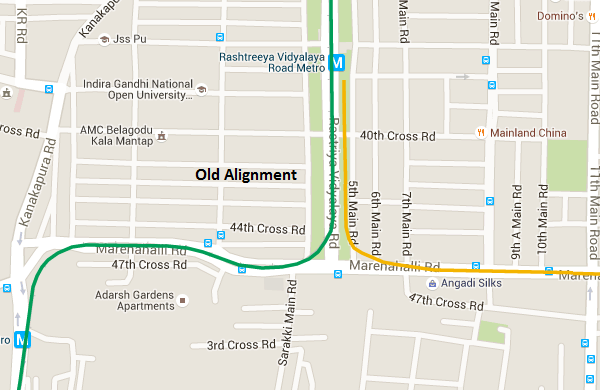 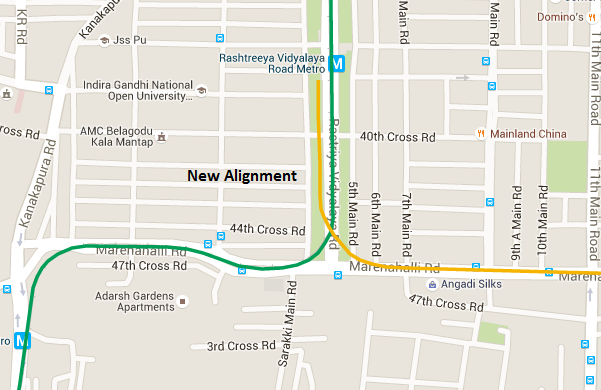 When built, this would be the first instance of 2 elevated metro lines crossing over each other in Bangalore. Elsewhere in India, Delhi has 5 locations where 2 elevated lines cross or will soon cross each other: