BMRCL invited bids for this package in late-December 2016 with an estimated cost of Rs. 820 crores, and the HCC-URC JV submitted the lowest bid at Rs. 797.29 crores.

In addition to a regular viaduct on either ends, the contractor will be responsible for building an approximately 2.5 km long double decker viaduct for vehicles and metro trains with 5 new stations at RV Road, Ragigudda, Jayadeva Hospital, BTM Layout and Central Silk Board: A detailed PDF document which shows the exact locations of all stations can be viewed here. Note that the viaduct will cross over the Green Line’s viaduct making its piers extremely high – see details/map here.

A massive 5 level interchange station will be constructed at Jayadeva Hospital after demolishing the existing flyover over Bannerghatta Road to allow users to connect to the Phase 2 project’s 21.25 km second new line between Nagawara & Gottigere. In the future, the Central Silk Board Station will become an interchange station with the 17 km Central Silk Board – KR Puram ORR Line which received the Karnataka Government’s approval in March 2017.

Out of all 3 packages on this line (others are P1, P2), this is the most difficult section to construct, and is expected to open up no sooner than 2023 due to its complex scope and various site constraints.

In the coming days, if no extraneous issues arise, then the BMRCL will go on to award the HCC-URC JV with the 72 km Phase 2 project’s 9th major civil contract: 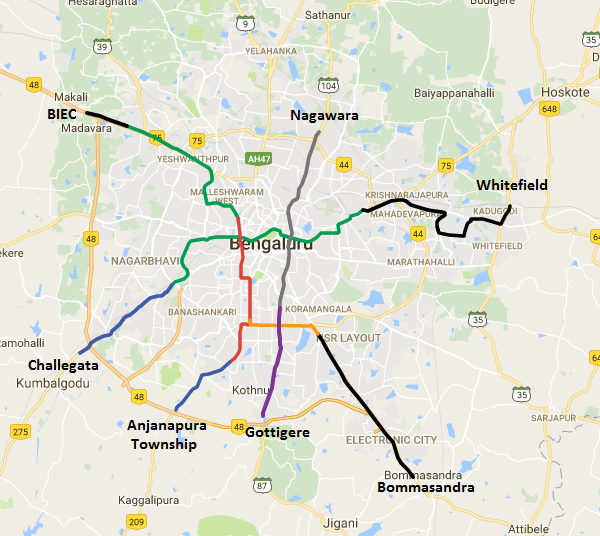 July 1 2017 Update: BMRCL has awarded HCC-URCC with this section’s contract: