The Delhi Metro Rail Corporation (DMRC) has invited bids from civil infrastructure companies for the construction of the 58.596 km Pink Line’s incomplete 255m viaduct (package CC-125) which will pass through the residential district of Trilokpuri’s Block-15.

Construction work on this section, part of package CC-26R between Mayur Vihar – Karkarduma, was originally awarded to the ITD-ITD Cem JV on November 9 2012, and after major delays in securing land for its construction, it appears that ITD has backed out of constructing the remaining section in order to save money (equipment rentals, worker salary etc) as well as to shift their focus to newer projects in Mumbai, Bangalore and Nagpur.

The notice is addressed to 6 civil contractors who’re in the process of building or wrapping up construction on other sections of the 160 km Phase 3 project as they’ve already got the requisite manpower and resources available. The list includes: (1) JMC-CHEC JV, (2) ITD ITD Cem JV, (3) CICO-YFC JV, (4) S.P. Singla Construction Pvt. Ltd. ,(5) Vijay Nirman Company Pvt. Ltd. and (6) Arvind Techno-Globe JV. 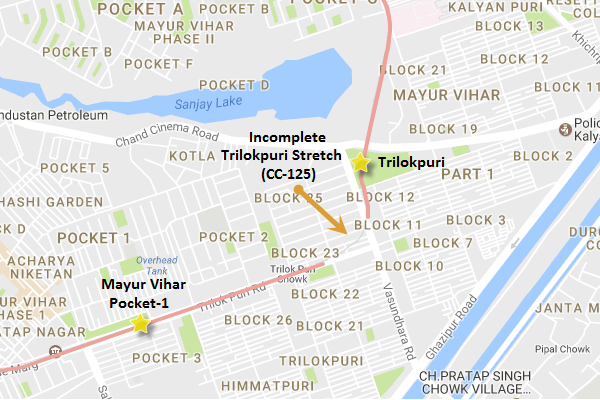 DMRC has estimated this package to cost Rs 10.86 crores and would like work to be completed within 8 months of the Letter of Award (LoA). The last date for submitting tender documents for bidding is May 8 2017 (3 pm) after which the bids will be opened & evaluated for eligibility on May 9 at 3 pm. Financial bids are expected to be opened in Q3 2017 and as I mentioned above, construction work will and can only start after (1) temporary rehab apartments are built, and (2) affected residents move out, hopefully by the end of the year. That said, the Mayur Vihar Pocket-1 – Trilokpuri – Vinod Nagar East – Vinod Nagar section will only open up towards the end of 2018 with a good possibility of things spilling into 2019.