Karnataka’s Minister for Bengaluru Development and Town Planning, KJ George, yesterday announced that the state’s Chief Minister has finalized the route for the city’s metro link to Kempegowda International Airport via Nagawara – RK Hegde Nagar – Jakkur – Yelahanka. This approximately 28 km line will run primarily on NH-44, and will be an extension of the Phase 2 project’s 21.25 km Gottigere – MG Road – Nagawara line which in March 2017 entered the tendering stage for its civil construction.

This finalized route doesn’t feature among the 2 routes suggested by RITES in October 2015 or the 9 routes the BMRCL sought public feedback on in September 2016 or even among the 4 routes finalized in late-April 2017. Its description was first mentioned on the sidelines of a Bangalore Development Authority meeting last week, but was not confirmed to have then been finalized by a Bangalore Metro Rail Corporation spokesperson.

Confirming the Chief Minister’s decision, here’s what BMRCL’s MD had to say in an interview to the TOI:

It is a slightly modified route and it does not match any of the nine initially floated for public response. It is a mix of the sixth and ninth routes and was found to be the most cost-effective option. This will ensure both Yelahanka and Jakkur get Metro connectivity.

With that, here’s what the line’s alignment would most likely look like: 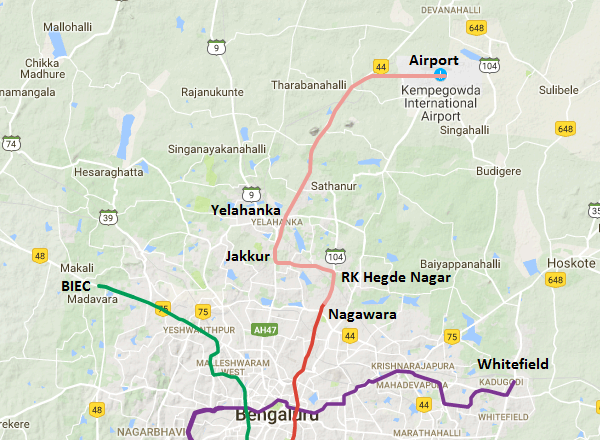 BMRCL will now work on preparing the line’s Detailed Project Report (DPR) which includes cost, length, stations, depot, signalling system, train operation plan, traffic forecast, alignment type (elevated/underground/at-grade) for different sections, land acquisition, funding scenarios and any possible future extensions. If the city’s 17 km Outer Ring Road (ORR) line’s DPR is anything to go by, then it could be ready as soon as July but there haven’t been any indications that work to prepare it will begin anytime soon.