South Korean rolling stock manufacturer Hyundai Rotem today announced that it has been awarded a 177.1 billion won (Rs. 1032.94 crore) contract to supply 32 three-car train-sets for Ahmedabad metro’s 39.259 km Phase 1 project. The trains will be manufactured at their Changwon plant and deliveries are expected to take place between April 2019 and July 2020.

The Metro-Link Express for Gandhinagar & Ahmedabad (MEGA) had invited bids for the system’s rolling stock in January 2016 and received bids from four firms – Alstom, Bombardier, CRRC and Hyundai Rotem. The bidding process got indefinitely delayed after CRRC got disqualified in the technical bidding round and pursued the legal route. They successfully challenged it in the Gujarat High Court to allow for their re-entry, but lost in the financial bidding round.

As per Hyundai Rotem, Ahmedabad’s new 2.90 m wide trains will have a maximum speed of 80 kmph, have a carrying capacity for 782 passengers and be capable of running on the “driverless” unattended train operations (UTO) mode like the Delhi Metro’s new RS-10 rolling stock. Each coach will have convenient space for wheelchair users, four CCTV cameras for passenger safety, fire detectors, LED route guide indicators and a LCD passenger information display system.

Here’s a render of the train’s concept design  – 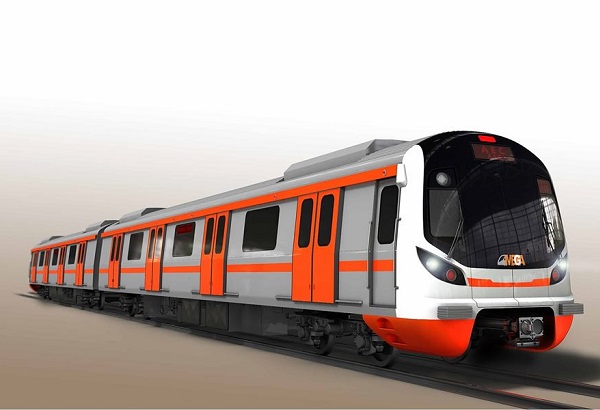 The design is very similar to what they submitted for Delhi Metro’s Pink & Magenta lines in 2013 – see its transformation from concept to design to production here. A similar transformation might take place for Ahmedabad’s trains.

With this development, Hyundai Rotem has entered yet another Indian city after Delhi, Hyderabad, Bangalore (BEML), Jaipur (BEML) and Kolkata (BEML).