The Delhi Metro Rail Corporation (DMRC) yesterday issued a public notice (see below) in major newspapers indicating they’ll be energizing the Overhead Electric (OHE) traction system in March for commencing trial runs along 2 stretches of the 58.6 km Pink Line. This new line, the centerpiece of the 160 km Phase 3 project, forms a ring around the city and has been beset with problems ranging from land acquisition to tunneling issues that has led to the DMRC missing its December 2016 deadline. 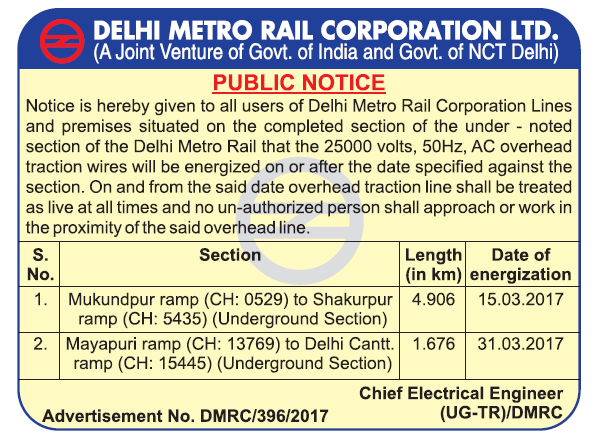 The 2 stretches mentioned are:

This has been made possible only after the up-line tunnel, located at at the mouth of the Mukundpur Depot in Rameshwar Nagar, was built & cleared of 2 TBMs via an emergency shaft in December 2016. Two other TBMs are still occupying the down-line tunnel and will be removed, one after the other, in the coming weeks. Only after that will the DMRC run a train through the up-line tunnel for testing the Azadpur – Netaji Subhash Place section.

Construction work resumed over the Ring Road at Mayapuri in the Q4 2016. Since it’ll take a couple more months to plug that entire section, the DMRC is most likely going to airlift and position 1 train on top of the Mayapuri Ramp like it recently did for the Magenta Line at Sadar Bazaar.

In March 2016, the DMRC issued a similar notice for energizing the Delhi Cantonment Ramp – Bhikaji Cama Place Ramp section following the completion of OHE works, so trial runs in this part of the city are effectively expected to take place on a 8.545 km (1.676+6.869) stretch between Naraina and Moti Bagh stations.

Here’s a map showing the locations of all the above ramps:

Let’s now see if the DMRC follows through with trial runs in March-April.