The Vaishali station on the Delhi Metro’s Blue line in Ghaziabad is the latest station to be rebranded! This station is now called Jagran Vaishali after Jagran Engage, an outdoor advertising agency under the Jagran Prakashan Ltd (JPL) group, won the semi-naming branding rights from the Delhi Metro Rail Corporation (DMRC) for a period of 10 years.

This re-branding initiative across 9 metro stations in the National Capital Region allows the DMRC to generate some extra revenue while offering corporates the opportunity to promote their brand by refurbishing the station’s interiors & exteriors in the brand’s theme and setting up advertisement spaces of 500 sq m. within the stations. 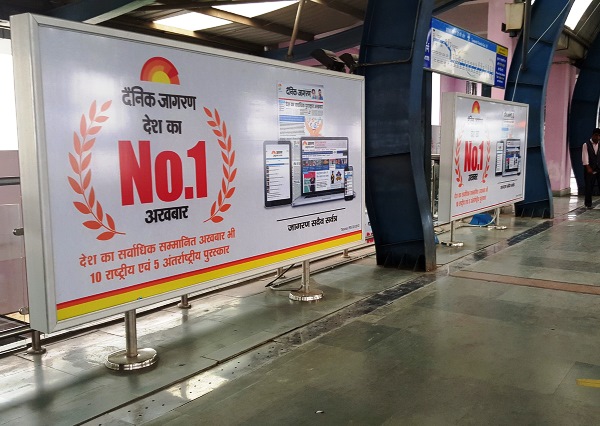 Dainik Jagran’s ad panel within the Vaishali station – Photo Copyright: All About Outdoor 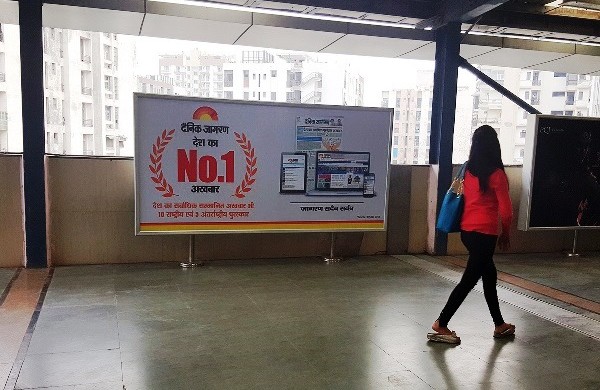 Dainik Jagran’s ad panel within the Vaishali station – Photo Copyright: All About Outdoor

DMRC shall also provide advertisement spaces of 500 sq m at the quoted rate of display area inside the selected station. The licensee can utilise any format of advertisement that will not limit to only backlit panels, scrollers, floor branding, roof branding, digital display etc. The contract shall include all feasible spaces including staircases, escalators, turnstiles, frisking panels/equipments, fixed/moveable panels, and elevator spaces product displays. It will enable Jagran to initiate media like smart posters, visual display by electronic media, projectors/holography or any other innovative advertising options such as installing digital advertisement panels in the form of LCD/LED panels, video walls or any similar format of advertisement (without audio). Advertisement inventory may also include smart posters, QR codes/graphics and canopy.

In the past 3 months, many stations on the Delhi Metro’s network have had brand names appended to them after various companies bid for them. Click on a station’s name below to read & see how each station has been rebranded:

With the above stations rebranded, the remaining 4 stations waiting to be rebranded are all located outside of Delhi and include stations at Golf Course, Botancial Garden – both on the Blue line in Noida and the HUDA City Centre and IFFCO Chowk station on the Yellow line in Gurgaon.

As a reminder, Gurgaon’s Rapid Metro was the first operator in the country which offered station naming rights. Some of the station on its 5.1 km line are called Indusind Bank Cybercity, Vodafone Belvedere Towers and Micromax Moulsari Avenue after various brands put in the highest bid. Following Gurgaon & Delhi’s example, the Noida Metro Rail Corporation in December 2014 announced that they will similarly auction the station naming rights along the 29.07 km Noida – Greater Noida metro line prior to it opening in late 2017.  Earlier this week, the Kochi Metro announced a similar proposal to allow corporates to bid on prefixing their brand’s name to the station’s actual name.