Links for interchanging or transferring rakes (metro train-sets) are coming up at 3 metro systems across the country. Incidentally all 3 are in the southern half, in the cities of Bangalore, Chennai & Hyderabad where the first phase of their metro projects are being executed. As you might have guessed by now, these links allow train-sets to be transferred from one line to the other for different reasons which include maintenance, rake balancing and depot sharing.

In all 3 maps below, the rake interchange links have been marked in orange.

Bangalore’s 210m long rake interchange link is located at the north-east corner of the Majestic interchange and is the only underground link of the 3. This link was planned since the depot at Byappanahalli was originally going to serve both the Purple and Green lines. Now that the Green line’s depot at Peenya has come up, the link is a little unnecessary, but in the future will help in case maintenance issues arise at one depot or if the rakes need to be transferred or balanced to increase the frequency of trains on either of the lines. 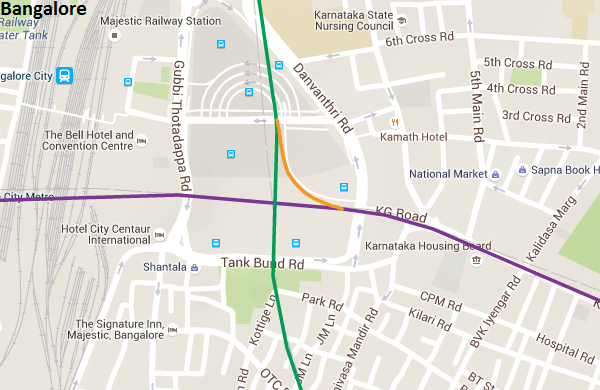 Satellite view of the rake interchange (this will be hidden in the next couple months):

Chennai’s rake interchange facility is the most interesting of them all. Built on the southern end of the Alandur interchange, the 2 elevated ramps (each roughly 400 meters long) here allow rakes to be transferred between the Airport-Washermenpet and the St. Thomas Mount-Central lines as only 1 depot was planned to be built at Koyambedu (see info & images) to service trains in the first phase of the project. 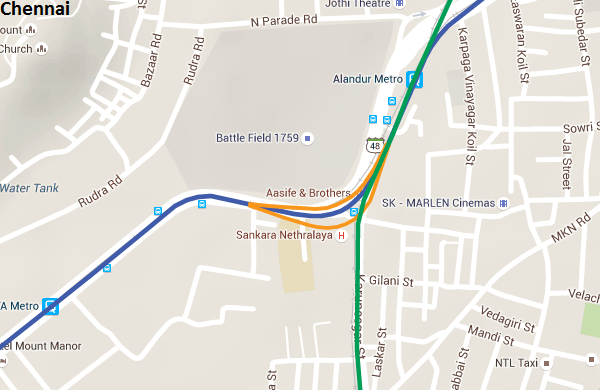 The red/white chequered canopy has been built to warn pilots while they come in to land at the nearby airport. Here’s a video of how the ramps looks like from the ground:

Hyderabad Metro’s rake interchange facility is the longest of them all at 750m, and allows trains to be transferred between the JBS-Falaknuma and Nagole – Raidurg metro lines. While a similar link is planned to come up at Osmania College, this link became necessary to build due to ongoing alignment issues that the system faces in the old city which requires intensive demolition of private residences, commercial establishments and religious structures. With this link under construction, trains on the truncated JBS-Falaknuma line (in blue) will be serviced & maintained at the Uppal Depot (see details & images). 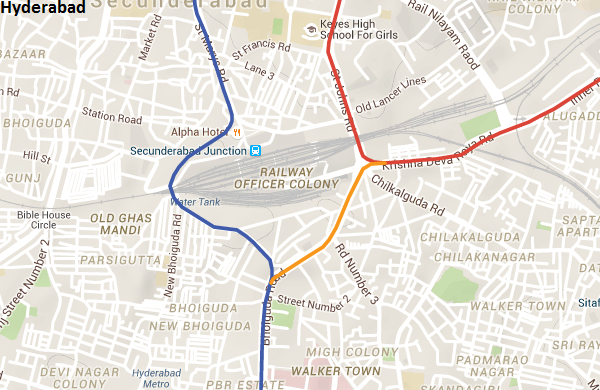 The rake interchange viaduct’s piers are visible in this satellite imagery:

With 4 new metro lines under construction in Kolkata under the Rail Vikas Nigam’s belt (see map), similar interchange links could come up at Noapara and New Garia, but details are a little sketchy at the moment. Similarly, the 2 new elevated lines in Mumbai’s western suburbs are supposed to form an interchange at the Dahisar (E) station, but no details on whether the trains will ply on each other have been announced. Each of those lines will have its own depot and train-sets procured via different contracts, so it’s quite unlikely to happen.

For more interesting facts and updates on India’s metro systems, check out my Home Page!