To recap this line’s history: The Delhi Metro Rail Corporation was entrusted with executing this line in December 2015 and had invited bids from infrastructure companies for constructing two elevated sections in January:

Here’s a map which shows the scope of both packages: 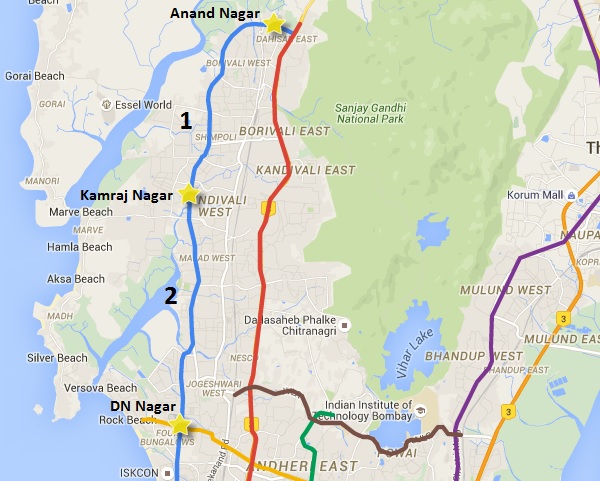 AECOM was recently awarded the Detailed Design Consultant (DDC) contract for this line.

While the northernmost station in the scope of package 1 is Anand Nagar, the line will eventually terminate at the Dahisar East station which will serve as an interchange with the Dahisar (E) – Andheri (E) line (shown in red above). Construction of that small connection between Anand Nagar and Dahisar (E) is included within the scope of the Dahisar (E) – Andheri (E) line for which NCC Limited was appointed as the contractor in April. Besides NCC, J Kumar & Simplex will build other sections of that line – view details here.

J Kumar’s bids will now be vetted and presented to the MMRDA’s Executive Committee for its approval which I expect would come through within two weeks. Construction for both the DN Nagar – Dahisar & Dahisar (E) – Andheri (E) lines are now on track to begin once the monsoons subside in August-end. 😀