The Bangalore Metro Rail Corporation Ltd on Friday signed its first memorandum of understanding (MoU) with the Embassy Group to fund the construction of its new 17 km Outer Ring Road Line between Silk Board and KR Puram. Rs 100 crores from this tie-up will be used to directly fund the Kadubeesanahalli Station’s construction which is planned to come up right in front of the Embassy Tech Village.

The line’s Detailed Project Report was prepared by BMRCL in 2016 who estimates its construction & system procurement to cost Rs 4202 crores. Instead of relying on foreign lenders, the BMRCL plans to fund this line through what it calls an ‘innovative financing model’ in which private entities are currently being engaged to pitch in anywhere from 25% to 50% of the line’s construction cost and in return be granted exclusive advertising and leasing rights within the stations to monetize on their investment. 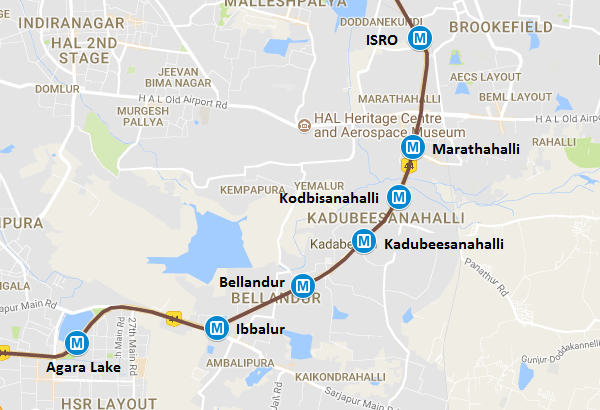 To see the exact locations of other stations along the route, see the DPR and comments section of this post.

Embassy will maintain Kadubeesanahalli Metro Station including housekeeping and maintenance along with all the equipment as per specifications laid by the corporation. There will be a ramp access directly to the Metro station from Embassy TechVillage, and a dedicated access from the exit point of the station. The private stakeholder will be entitled to utilize the pre-determined spaces for advertisements. Embassy can also use the leasable retail space measuring approximately 3000 sq.ft at the metro station and have the advantage of leveraging the linear zone of 250 m around the Kadubeesanahalli metro station. The construction will be done in accordance with the facade designs and specifications approved by BMRCL. Embassy has agreed to pay the amount in installments. The period of concession and permission granted to the real estate company for 30 years starting from the date of commencement of commercial operations and could be extended further on mutual terms.

A MoU is essentially a non-binding agreement, but this is a good start for a funding model that has never been tested to this extent in the past. If this commitment materializes, then the BMRCL will still need to secure another Rs. 1000 to 2000 crores. Here’s a table from the DPR which lists out different funding scenarios –