Hat tip to many readers out there for alerting & reminding me about the Bangalore Metro Rail Corporation making their July newsletter available! As a reminder, all data in the newsletter was recorded at the start of the month – i.e. July 1.

Continuing from the May newsletter, the BMRCL’s team has done a good job in capturing the progress of Phase 2’s extensions & new lines. However, bear in mind that 0 new notices inviting construction have been posted since May 2015 and that is worrying. The BMRCL till now has only invited bids & awarded contracts for 3 packages: 2 for the extension of the Purple Line to Challegata and 1 for the extension of the Green Line to Anjanapura/NICE junction – and work on those stretches has just commenced over the past couple months. As such, without any new new packages in the tendering stage (see BMRCL’s tender page), construction work elsewhere is at the very least 12 months away from beginning.

Financing is a vital component of infrastructure projects and here’s something for all of you to think about:

Metro organizations publish notices to invite bids and award contracts only when funds are guaranteed or available. In Ahmedabad, JICA committed required funds in November 2015, and since then, MEGA has finished inviting bids for the construction of its entire 37.77 km Phase 1 project. It’s a similar story in Lucknow where the LMRC is expected to finish inviting bids this month – again, with requisite funds in hand from the EIB. Coming back to Bangalore, the BMRCL has only been able to conclude 1 ODA loan deal of Rs. 1500 crore out of Rs 12000 crore that it requires. The CPRO maintains that they’ve negotiated the terms for the remainder & have other options to finance, and all of this is part of their strategy to keep debt low and avoid interest. That strategy sounds straight out of Finance 101, and while I’m no loan guru (or shark), it’s one thing to conclude a deal and another to withdraw & receive funds. Take Mumbai Metro’s Line 3 for example – contracts for its construction were just awarded last week and now there’s news of the loan’s 1st tranche (Rs 450-500 crore) being released by JICA for its construction. MMRCL had tied up funds for this project in 2013 – so was MMRCL piling on debt all this time? I don’t believe so. What do you think?

Chickpet’s northern shaft from where segments are lowered for Krishna to build rings – Photo Copyright: BMRCL

Here’s a map displaying the incomplete Green line’s underground section between Majestic & Chickpet. As of July 1, Only TBM Krishna is tunneling from Chickpet to Majestic. 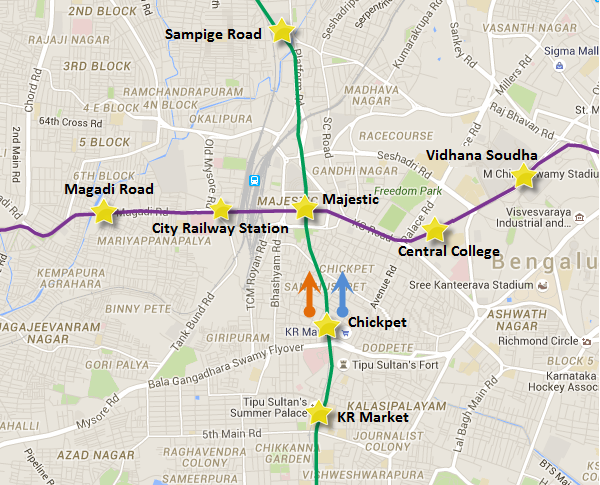 Here’s a table which compares the progress made by the 2 TBMs in June:

• The Krishna TBM made a breakthrough at Chickpet station on August 31 from the KR (City) Market station after a slow and tiring journey of 22 months. After being put through repairs for 112 days, the TBM was then commissioned on December 22 towards Majestic for one final drive.  June was one of the toughest months for the TBM’s operators, but they are now seeing much more favorable conditions.
Distance Left –  139.5 meters (July 1) & 117 meters (July 11)

• The Kaveri TBM was commissioned from the Chickpet station in mid February 2015 and made a successful breakthrough at the Majestic station’s South Shaft on June 8 – view details, lots of images and a video. The TBM’s crew is now engaged in dismantling the TBM – see images here and here.
Note: TBM Kaveri will not be a part of next month’s update.

The distance between the 2 stations is only 1.5 km, and both twin tunnels between the North Ramp & Majestic have were completed by TBM Margarita and TBM Godavari. Besides plinth work in the track area, now flash butt welding has started. Here’s a recent image showing the 1st turnout placed at the intersection of the underground line with the rake interchange line that connects up to the Purple Line.

In the June update, I mentioned how the the CPRO indicated that they’re now now targeting to open all pending stretches (Sampige Road – Majestic – National College – Yelachenahalli) in one go, but now the public response seems to have changed once again.

…and I received none:

@gadagrj @cpronammametro Still waiting for details on the alternate plan. Can you please explain?

Over the past months, I was expecting TBM Krishna to arrive at Majestic’s South Shaft in August-September. Tunneling is always unpredictable, but with so many of you asking for a rough time-frame, I’m going to further narrow it down to late August.

Let’s keep construction aside for a bit – there’s far too much work at the stations and shaft remaining. As most of you know, the northern section’s tunnels were completed in November 2015 and April 2016, and with cross-passage works coming to an end, only recently has track-related activity commenced. I expect the southern section to contain at least 1 cross-passage, if not 2 (based on distance) for emergency and maintenance purposes. Despite that, the BMRCL amusingly still maintains they will have the tunnels (and tracks) ready in September to be able to send trains and begin trials on the elevated National College – Yelachenahalli section.

It’s only a matter of time for the BMRCL and Karnataka government to announce a new deadline for the entire Phase 1 project. Perhaps they’ll do it when Krishna makes a breakthrough? Perhaps they’ll skip that all together and continue telling Bangaloreans that work is complete and they’ll only need a few more months, as the CPRO has done so far with the northern section? We’ll have to wait and see how they spin it this time around.

BMRCL’s plan of commencing operations on the pending stretches is still pretty vague and construction activity (stations, shafts) is showing no signs of picking up pace. It’s certain that no new stretches of Phase 1 will open this year. From an earlier estimate of mid 2017, I’m now expecting the entire Phase 1 to be operational in Q3-Q4 2017.

What are your thoughts?